TLP180: The Captain Class – A Bold New Theory of Leadership

Sam Walker is The Wall Street Journal’s deputy editor for enterprise, the unit that directs the paper’s in-depth page-one features and investigative reporting projects. A former reporter, sports columnist, and sports editor, Walker founded the Journal’s prizewinning daily sports coverage in 2009. For this episode, he dives into his book, The Captain Class –  a bold new theory of leadership drawn from the elite captains who inspired their teams to achieve extraordinary success.

Named one of the best business books of the year by CNBC, The New York Times, Forbes, strategy+business, The Globe and Mail, and Sports Illustrated.

The seventeen most dominant teams in sports history had one thing in common: Each employed the same type of captain—a singular leader with an unconventional set of skills and tendencies. Drawing on original interviews with athletes, general managers, coaches, and team-building experts, Sam Walker identifies the seven core qualities of the Captain Class—from extreme doggedness and emotional control to tactical aggression and the courage to stand apart. Told through riveting accounts of pressure-soaked moments in sports history, The Captain Class will challenge assumptions of what inspired leadership looks like.

[3:05] Sam looked up to sports teams and famous locker room speeches as a youth, but he found that most teams do not run the way he thought.

[5:40] In his book, Sam looked at teams who had sustained success over a number of years and exhibited characteristics one wouldn’t expect.

[8:10] Sam researched his book with certain assumptions about teams, but was pleasantly surprised. He realized as he did more research, that he really had a lot to learn about how leadership really works.

[10:25] Some of the qualities and characteristics that team captains had were:

[20:05] There are two types of aggression. There’s the kind of conflict that’s really personal and it’s always toxic. If a leader engages, it will destroy the team. There is also something called task conflict, which can get very heated, but is never personal. It is always with the good of the team in mind.

[25:10] When you put successful people together and they’re all working towards a goal, it ends up being a lot of fun, and it should be! They have a level of trust with their teammates and a level of humility among the group that allows them to not worry about the small stuff.

[28:15] A lot of people believe Michael Jordan was a great leader. It was actually Bill Cartwright who was the glue that held everyone together.

[30:35] We reward heroes, but that is just an indicator that the team dynamic failed. We think working late nights and making sacrifices is a good thing for the company, but if it’s just one man pulling the cart, you’re not succeeding as a leader.

[37:10] Leaders who are on great teams and have seen sustained success are running 90 miles an hour, foot on the gas, all the time. There is no such thing as a slow day for these leaders.

[43:35] Sam challenges you to think about all the managers you’ve had over the years and read this book and re-rank them based on the qualities listed in his book. 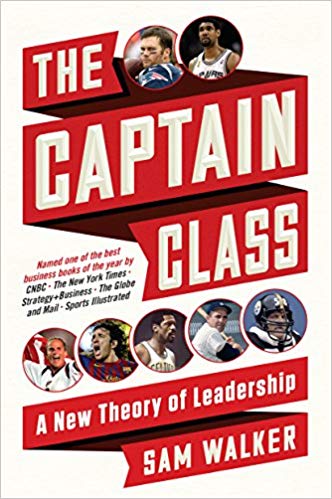