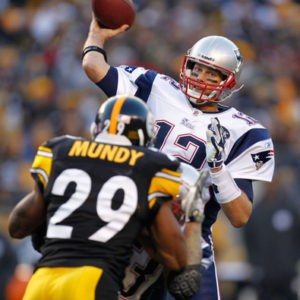 Ryan Mundy, eight-year veteran of the National Football League, Super Bowl champion, and angel investor at Techlete Ventures, discusses leadership in football from his father’s coaching in hlop Warner, through his high school, college, and NFL achievements. Ryan is grateful for all the people who helped him along the way, but he is most grateful for his father, who taught him to be self-reliant, and to commit to his goals. Ryan recalls the diversity of his NFL teams, and how he learned from people of different backgrounds. He stresses the importance of proper leadership on a team, and how it leads to success. Besides being an angel investor, Ryan is on the board of the NFLPA, and is solving problems athletes encounter as they transition from a sports team to a business career.

[3:18] Ryan was recruited by the Pittsburgh Steelers out of college, and played in (and won) the Super Bowl his first year. After the Steelers, he played for the Giants, and then the Bears. After eight years in the NFL, one day he began to think, ’Wow, that looks like it hurts!’ He saw that he had lost his drive, desire, and passion, so he retired from the NFL, and completed his MBA.

[7:14] As a rookie, Ryan looked up to backup QB Charlie Batch, a great locker room leader. Charlie’s even-keeled demeanor demonstrated how to be a pro, on and off the field. Charlie now runs the Best of the Batch foundation, unlocking potential in communities. Charlie always performed when he was called, and serves with the same drive in his post-retirement career.

[9:55] In business, a consultant is called in from time to time, but in football, a backup QB is there all the time, so he’s vested in the team. Even as a 10-year veteran, Charlie was a great example to Ryan, who knew he had to stay in line, or be weeded out.

[11:42] At the age of seven, Ryan’s dream was to make it to the NFL. By his junior year in high school, he started believing it could be a reality. Ryan tells of a setback in his college football career that caused him extreme stress for months. His responses to the challenge built up his courage, and the confidence he could do what he wanted.

[17:13] Ryan is a self-starter and go-getter, and was taught by his father to believe in himself. In college, he was a model student athlete, setting the example in the classroom and on the field.

[19:14] Ryan discusses some of the leadership problems hindering the Bears since the ‘85 Super Bowl, and the condition of the team, coaches, and management when he played for the Bears. He contrasts that with the continuity of leadership within the Steelers’ organization.

[24:22] Ryan’s father has been with him since the beginning, when he coached him in Pop Warner football. He is Ryan’s example. Others have helped along the way, but his father was a constant guide. He had a plan, he was committed to the plan, and he made sure Ryan worked out and did his school work.

[27:28] In the NFL, Ryan’s teammates’ backgrounds were diverse. He appreciated the opportunity to get to know more about the world and about people. Football gives you a window into what sort of person somebody is. He developed greater self-awareness and ability to interact with people.

[28:11] Ryan has great concern for transitioning athletes, especially those who didn’t make much money, and don’t have a degree. Most athletes are not rich. Ryan is a board member on the NFLPA and is trying to solve for the problems of transitioning.

[33:46] You need a level of passion and desire to be elite, either in Special Forces, or in pro sports, and as you develop, that passion becomes your ‘normal,’ which allows for a balance between emotion and performance. You always have to be aware and maintain that balance without losing your passion.

[41:18] Ryan is going on the Crucible, along with a retired 3-star general who commanded Special Forces. This will be Ryan’s first camping trip! He looks forward to the wilderness experiences, and to connect with other high-performing individuals across various fields. He loves hearing people’s stories.

“I got drafted back to my hometown Pittsburgh Steelers, and subsequently, during my first season we won the Super Bowl!”

“I thought … ‘If it’s that easy, we should do this every year!’ So I was looking forward to the next Super Bowl.”

“I’m working through it and I have a lot of good people in my corner, and most importantly, I’m just confident in myself.”

“I always made sure that I was still doing everything that I … could to give myself the best opportunity … forward.”

“My father has been the one that’s been there from start up until now.”

“There have been tons of people throughout my life who have been there for a season … and helped me move along the way.”

“If [my father] didn’t make me get back out there, we may not even be having this conversation today.”

“[My father] had a plan, and he was committed to the plan, whether I liked it or not, he had a plan and I’m very thankful.”

“Football is a game that immediately gives you a window into what type of person somebody is … It’s immediate feedback.”

“A lot of athletes are being underserved, and that story’s not being told.”

“I still think there’s something greater out there that I could provide, and help some guys and girls out.”

“I love hearing people’s stories because I always believe that there’s a nugget or a tidbit … that I can … relate to.” 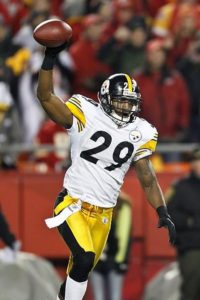 Bio
Ryan Mundy, a native of Pittsburgh, PA, is an eight-year veteran of the National Football League. He attended college at the University of Michigan (Liberal Arts) for undergraduate studies and West Virginia University (Athletic Admin) for post graduate courses. Also, Ryan recently finished his MBA studies at The University of Miami (FL). Drafted in 2008, Ryan spent five seasons with the Pittsburgh Steelers (Super Bowl XL Champion), one season (2013) with the New York Giants and two seasons (2014-2015) with the Chicago Bears.

Ryan is now an Angel investor, through Techlete Ventures, in technology starts that focus on cultural shifts that impact the way we live work and play.

Ryan currently resides in Chicago, IL with his wife Jillian and daughters Ryan-Taylor (5) and Camryn (2).