TLP202: This is No Time for Spectators – General (Ret.) Martin Dempsey

General Martin E. Dempsey served as the 18th Chairman of the Joint Chiefs of Staff, the senior officer in the Armed Forces and the military advisor to the Secretary of Defense and to the President. General Dempsey is the co-author of “Radical Inclusion: What the Post-9/11 World Should Have Taught Us About Leadership.” “No Time For Spectators: The Lessons That Mattered Most From West Point To The West Wing” is Dempsey’s latest book, and he examines the limits of loyalty, the necessity of sensible skepticism, and the value of responsible rebelliousness, and explains why we actually should sweat the small stuff.

The conversation with General Dempsey  takes listeners behind the closed doors of the Situation Room, onto the battlefields of Iraq, and to the East German border at the height of the Cold War. The conversation also answers: Why are the best leaders the ones who are most adept at following? What should we expect of those who have the privilege of leading?

The relationships between leaders and followers—employers and employees, politicians and constituents, coaches and athletes, teachers and students—are most productive when based on certain key mutual expectations.

[3:05] General Dempsey spent some time as a youth really getting to know his origins and understanding his Irish background.

[6:50] Chapter 5: Don’t Hurry. If you try to spend up the process, you are bound to miss a few steps along the way. For example, it takes time to build critical relationships from within the organization. Trust takes time.

[14:25] People are wondering when they can get back to normal. The question really is, was normal even that good? Can we build a better ‘normal’?

[16:15] We all have our own lens or level of expertise but it’s our character that really brings these levels to light. Character is the final filter for making tough decisions based on the limited information you might have.

[22:15] Innovation happens with a bit of rebelliousness. The question becomes whether you can define the limits of rebelliousness so that it can still be responsible and valuable to the organization.

[28:35] General Dempsey really enjoys the ‘art’ of Twitter and how he creatively has to convey his message within a limited amount of characters. There is real power towards being able to share your message concisely.

[34:10] This is our first global crisis in the social media age. You see people being very helpful and also manipulative. General Dempsey wrote a chapter in his book about sensible skepticism. In the world we live in today, you can’t take anything without applying your own common sense to it.

[35:10] General Dempsey believes you can get people to come together through influence and collaboration. Do not rely on your authority as a leader to get empowerment/trust done.

[42:15] Sometimes not everybody can have a say or voice in the decision-making process, but if you try to make it as inclusive as possible when you can, people are not going to think less of you during the times where you can’t include them.

[49:35] It was tough for General Dempsey to see fallen soldiers, but it was even tougher trying to comfort the men who still had to fight after losing someone they cared about. He could see in their eyes the mix of emotions between fear and guilt.

[54:00] General Dempsey’s challenge: What has this pandemic done to you/for you?

No Time for Spectators: The Lessons that Mattered Most from West Point to the West Wing 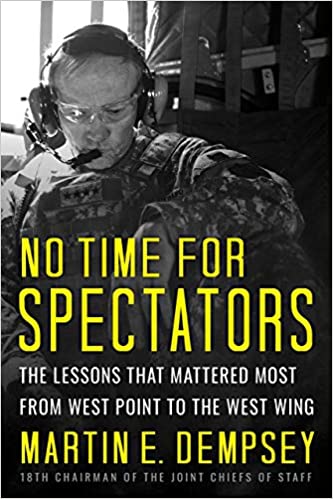 TLP201: Asking is the Key to Generosity
TLP203: What You Actually Control When Overwh...