Dr. Zoe Chance is a professor at the Yale School of Management. Her research has been published in top academic journals and major publications. Her framework for behavior change is the foundation for Google’s global food policy. She is also the author of Influence Is Your Superpower: The Science of Winning Hearts, Sparking Change, and Making Good Things Happen. In this conversation, Zoe describes the forms of influence and she promotes the theme that good relationships lead to good work. She encourages having the difficult conversation the same day you notice something is amiss, so problems can be quickly resolved and resentment doesn’t build. She challenges the listener to use influence in the grand scheme, and not just for individual purposes.

[2:11] Zoe, a sci-fi fan, named her daughter Ripley after Ellen Ripley from Aliens.

[5:16] Almost all of us, even the most successful, have negative feelings about influence strategies or tactics, but almost all of us would also like to be more influential. Influence has a bad rap. We think of it as distasteful. With new science, Zoe is bringing back the idea of influence as a leadership trait.

[7:06] People have different definitions of influence and manipulation. Zoe considers influence to be anything that shifts someone’s thinking or behavior, including manipulation, persuasion, behavioral economics, coercion, military might, and incentives. Manipulation is someone trying to influence a person in an underhanded way with a motive that does not align with the well-being of the person.

[8:13] Behavioral economics nudges are mostly imperceptible, but would not be upsetting to people being influenced for their best interest, such as attempts to get people to save more for retirement.

[9:48] Over the past year, up to the rise of bad inflation, employees have had a lot of power, and companies were desperate to hire. There’s been a crisis in the service industry. Now the power is shifting to employers. They want people to be there but, for the most part, they don’t have good reasons for wanting people to be there. Humu’s Laszlo Bock asks, “Why, to look over their shoulder?”

[11:51] Jan, Zoe, and Jim discuss whether most companies need to have their employees in the office, and how the return to the office is being handled.

[13:51] Jim finds that in-person meetings are much more effective than online meetings that are filled with side-text meetings within the meeting. Jim also observes the need to train new college graduates in the culture of the organization. A culture needs to be maintained and groomed like a garden and that happens better in person.

[15:31] Zoe would like to see leaders be better able to create the culture that they want. Bringing people back to the office to experience a negative culture is a horrible plan.

[17:19] Jim contrasts the freedom of travel and the restrictions of the cube farm he experienced early in his career. He didn’t like working in a cube and it affected his career. Now, since the pandemic, everyone has enjoyed freedom, and once freedom has been enjoyed it’s hard for it to be taken away. Zoe says taking freedoms and privileges away will cause a rebellion; she shares an example from a bank.

[20:26] Zoe shares a story featuring the Magic Question “What would it take for that to never happen again?”, and how to use it. It acknowledges that the people you are trying to influence know much more about their life than you do. It’s not perceived as pressure to follow your advice and it can lead to a commitment to the positive outcome you want.

[26:05] Zoe gives a shoutout to the veterans who come through the Yale School of Management. The professors love to have veterans in their classes because they are good listeners, and pay attention to the professors, their colleagues, and their classmates. They amplify other people’s ideas and ask follow-up questions; they only speak when they feel they have something important to share.

[28:16] Zoe tells about her TEDx talk, “How to Make a Behavior Addictive.” She tells how a pedometer injured her body, her marriage, and her relationships. She is vulnerable to technology. Social media is addictive because it’s designed carefully to keep your attention. There is evidence that social media does much more harm than good. Zoe has studied the psychology that makes people want to come back.

[35:38] Zoe shares advice for leaders on having difficult conversations involving challenging feedback. Have these conversations as soon as you realize that there’s something amiss, ideally, that day. If you are giving criticism, the longer you wait, the more betrayed the person feels because you’ve been harboring resentment against them. Having the practice of bringing it up as soon as you can is life-changing.

[39:35] How can you have more power within your organization? Internalize the idea that good work comes from good relationships. Reach out to get to know challenging people in other departments and ask questions. “How is this going for you? It’s kind of been a struggle for me and I’d like to understand your perspective.” It’s hard for people not to like you when you reach out and connect with them.

[41:42] Research shows men’s social and professional networks overlap a lot while women’s social and professional networks do not. If you are a woman, Zoe advises you to reach out to women and men at work, especially if you’re not already friends with lots of people at work. You will find a friendly rapport and reciprocity that leads to things happening more easily. Men usually have better networks.

[43:41] As Zoe was writing Influence Is Your Superpower, she asked a group of people about negotiations. Only 40% of men and 17% of women said they like or love negotiating. When she asked another group to describe their most recent negotiation, their adjectives were overwhelmingly positive. About 80% of them had had a good result and felt empowered!

[47:54] Zoe discusses power in an organization. Influence works the same in leadership and relationships. The idea that a leader should never apologize because apologizing gives up power is wrong to Zoe. You build a lot of social capital by apologizing at the right time, in the right way, and by taking responsibility. That’s powerful!

[49:44] Zoe provides an anecdote that listeners can copy about a leader raising his status by sharing the spotlight. Jess Cain VP of Customer Service at Eversource has a 96% employee engagement rating by sharing a short weekly voicemail including a spotlight on two different team members. She has 1,500 members on her team. Jan notes also that people support what they help create.

[53:27] Zoe’s challenge to listeners: Challenge the frame of consumerism. Thinking of ourselves as consumers has caused the climate crisis. Think about using your influence in the grand scheme and not just for your benefit. Be a role model. Zoe is donating half the profits from her book to 350.org.

[56:00] Closing quote: “Think twice before you speak because your words and influence will plant the seed of either success or failure in the mind of another.” — Napoleon Hill.

“Almost all of us, … have mixed feelings about influence. … If I ask people … what are three adjectives that come to mind when you think of influence tactics, [it's] yucky, greedy, manipulative. … When I ask … ‘Would you like to be… Click To Tweet “Employees have been more productive at home than they have been at work, … but it hasn’t changed the fact that employers want employees to come back.” Click To Tweet “Employers that offer more flexibility are going to do much better in the long run, because they’ll be able to recruit the best talent.” Click To Tweet “As most academics do, we collaborate with people that we never see and that’s partly because we’re introverted and so we’re kind of happy to be in our little cave. But there’s no problem with collaborating with people that you… Click To Tweet “If you want to onboard new people and help them make friends; to have informal conversations and collaborations, OK, that’s great. We just don’t need to all be at the office every single day, or even every single week, right?” Click To Tweet “Plenty of surveys have shown that leaders are actually out of touch about the real culture of their company. … the actual reality is kind of a crappy culture. It’s horrible to bring people back to the office to experience the… Click To Tweet “Bringing people back to the office or allowing people to work remotely has a differential impact on women and people of color and various groups. So there’s more equality when we have more flexibility. That’s another reason I’m… Click To Tweet “Every freedom, every privilege, should be so carefully and thoughtfully doled out with the expectation that what you’re giving an employee is going to be in perpetuity, or there’s going to be a rebellion.” Click To Tweet “When she’s asking this {Magic Question], she’s respectfully acknowledging ‘Listen, you know all kinds of things that I don’t know,” which is always the case with the people we’re trying to influence. They know all kinds of things… Click To Tweet “The most addictive piece [of social media] … is called ‘variable intermittent rewards.’” Click To Tweet “We also often don’t really realize what our expectations are until they get violated.” Click To Tweet “Just internalize the idea that good work comes from good relationships.” Click To Tweet “There is a ‘liking’ gap of 12%, where people like you 12% more than you think that they do. And this very much includes people who you have some bit of conflict or strife with.” Click To Tweet “The majority … have this idea of negotiations that … comes from the movies. … We don’t directly observe many negotiations and we’re just not realizing that in our lives, most of the time when we’re negotiating, it goes pretty well.… Click To Tweet

Influence Is Your Superpower: The Science of Winning Hearts, Sparking Change, and Making Good Things Happen 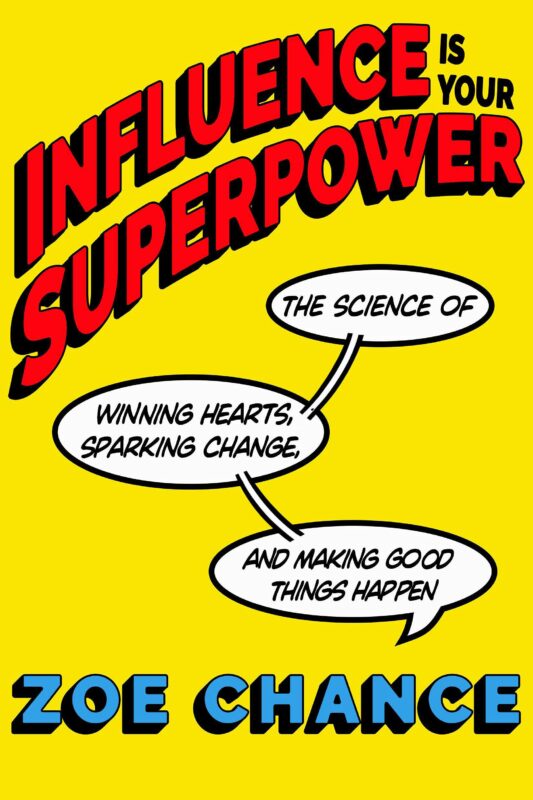 7 Rules of Power: Surprising–but True–Advice on How to Get Things Done and Advance Your Career 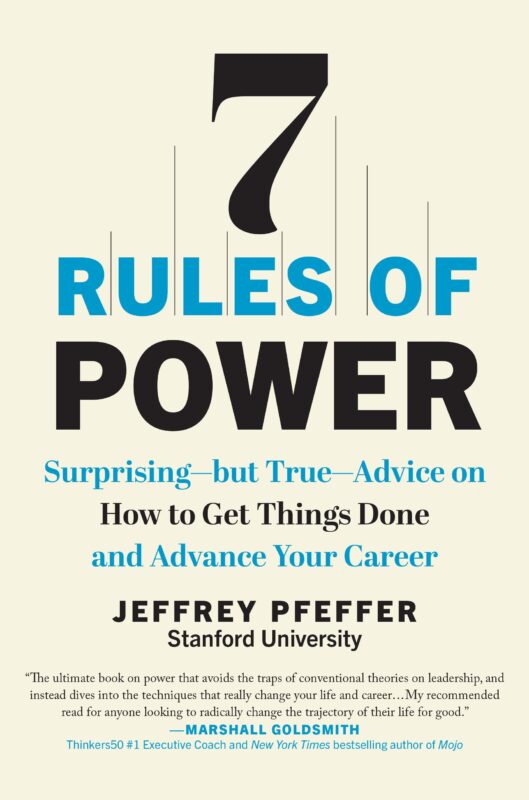