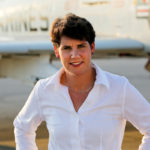 Amy McGrath is on a mission to bring back servant leadership, civic responsibility and open discourse to Capitol Hill. As both a graduate and former teacher at the United States Naval Academy, Amy has committed herself to serve the country as an ethical, truthful and tactical leader. She was the first female Marine to fly in an F-18 Hornet on a combat mission.

Now running for Congress in Kentucky, Amy speaks with Jim and Jan about the standards she would like to bring back to Congress, why facts and the truth matter, what motivates her as a leader, and how she plans to bring her military experience into the political realm to unify.

[1:43] Amy attended the Naval Academy, and later became a Congressional Fellow, serving as Defense and Foreign Affairs Policy Advisor, and then a liason to the State Dept.

[3:10] Amy explains why her call sign is Krusty the Klown. In the Marine Corps, callsigns are not supposed to be flattering, and her hair would stick out the sides of her cover.

[4:21] Right now, Amy is focused on her three small children and running for Congress, but does plan on flying again.

[6:02] Amy feels that we have leaders in both parties who have told people what they want to hear, who they should point the finger at, and suggest that there is a quick fix. That was one of Amy’s main interests in running her campaign, to make sure she was honest and courageous at every step along the way, even if the issues were complex, and her platform suggested that we have to work hard and together to solve the problems.

[8:36] One of the things Amy respects about recent guest General Stanley McChrystal is his idea of national service and the government helping with community to unify our country and to help with inequality.

[10:42] A recent speech by a politician brings up the topic of the polarizing speech vs. the new wave of greater discourse, and constituents having the ability to talk directly with their leaders to share their current concerns and desires for change. When Amy sits with people in her Georgetown community, she finds that despite all the differences in political beliefs and affiliations, they have a common thread of concern of our country and the hope we can trust a leader is truly listening, and not just spreading propaganda for the sake of what people want to hear.

[13:53] Amy serves the country first before any political representation. She calls running for Congress her 90th mission, because she flew 89 missions, both for Iraq and Afghanistan.

[15:40] Amy has a “Leaders Eat Last” mentality, and feels though it is time for those in power to look out for the well being of the people before themselves.

[16:45] So many people in America are just getting by, are just struggling to make ends meet while working 2-3 jobs. The best way Amy can lead by example is to hold herself to high standards, and then provide avenues for others to follow suit.

[19:00] In the military, you serve the American people and the federal government. Opportunities are not handed to you.

[19:46] While working with a representative, Amy noticed that although the Representative herself was a true public servant, the institution set in place called for band aid fixes and reactionary responses.

[20:23] True leaders don’t solve problems for the sake of credit or symbolic gestures. They look at the plan from afar, study it, and strategize while considering all angles, no matter how complex the issue. Once in motion, it’s important to be flexible and continue studying the plan to see if there may be ways to adapt even better.

[25:04] Before we make any decision or plans, we must know the truth, and the actual facts.

[27:31] Amy’s assignment to her class while teaching at the Naval Academy exposed that many members of Congress and Senators had propaganda and non truths on their website. The students at the Naval Academy make up some of the best minds in the world, so there is a concern on how politics has replaced truth and facts for popularity.

[36:45] It takes a group to make a difference and turn the tide against corruption. This starts with taking responsibility

[39:57] Amy’s husband is a Republican, and she appreciates that representing the idealist America where both sides can have an intelligent discourse with compromise.

[43:55] The first order of business Amy would tackle in her term would be health care and assembling a group of people that are taking action to make a difference.

The Lowest Form Of Leadership

When Amy McGrath was 12 years old, she fell in love with military fighter jets. Wondering why there were no women flying, Amy discovered there was a federal law in the U.S. prohibiting women from serving in combat roles. Amy began writing letters to members of Congress advocating for change to remove the restriction on women and wrote every member of the House and Senate Armed Services Committees. During her senior year of high school, the combat exclusion law was lifted. Amy attended the United States Naval Academy and graduated in 1997 with a B.S. in Political Science.

She was commissioned as a Second Lieutenant in the U.S. Marine Corps, where she went on to complete flight school first as a Weapons Systems Officer, and later as a pilot in the F/A-18 Hornet. She completed a tour flying missions in Afghanistan in 2002, becoming the first female Marine to fly in an F-18 on a combat mission, and a second combat tour flying in Iraq in 2003. In 2009, Amy married U.S. Navy Lieutenant Commander Erik Henderson and both were later deployed to Afghanistan. They now have three children. In 2011, Amy was assigned to Washington D.C. as a Marine Corps Congressional Fellow, serving as defense and foreign affairs policy advisor to Rep. Susan

Davis of San Diego. She then served in the Pentagon as the Marine Corps’ liaison to the State Department. Having reached the rank of Lieutenant Colonel, Amy’s last assignment was teaching at the U.S. Naval Academy. Amy retired from the Marine Corps on June 1, 2017 after 20 years.