Author David M. Cote, the much respected former CEO of Honeywell (who took the market cap from $20B to $180B) shows how you can hit your short-term goals without sacrificing long-term growth as a leader. In Winning Now, Winning Later, Cote shares a simple, paradigm-shifting method of achieving both short-and long-term goals. Even in a recession, accomplishing these two seemingly conflicting things can ensure you emerge from a crisis stronger than ever.

Fortune magazine said, “Former Honeywell CEO David Cote just wrote one of the best guides ever on how to lead a company.”

[2:10] David had a lot of ambition, but no role models or direction growing up. He quit college twice and it took him six years to finish.

[9:00] Herd thinking is alive and well. Leaders need to be thinking independently.

[11:25] One of the things only a CEO can do is balance long term yield with short term investment.

[18:15] David was sick of seeing presentations 100-plus pages long about their competitive advantage. You’re lucky if you have two to three things to your advantage, but 20? It means the team didn’t really think about this consciously. As a leader, it’s important to question everything and not just accept these presentations as fact.

[22:05] David would ask the most junior of people to the most senior of people in the room, “What do you think I should do?” It creates some fascinating dynamics between your staff.

[24:35] After understanding everyone’s opinion, David would then make his decision and explain the thought process behind that decision.

[25:15] People think that if you don’t agree with their opinion, you weren’t listening. However, there is a difference between listening and agreeing. By explaining a decision, people feel listened to and understand why you chose what you chose.

[32:50] You want every business in the country to constantly become more productive. The downside to that is that certain jobs will disappear forever.

[36:35] There are a number of professions in this country that we don’t do a good job training for, which creates high demand and low supply.

[38:25] Schools have an outdated teaching model. David hated school because he didn’t know what was relevant to him and what was not. Schools need to adapt and find better methods to keep kids interested.

[40:30] Business has been the biggest force of good the world has ever seen.

[42:10] Leaders need to be thinking about how to do all the right things for the long term while at the same time providing short term results that validated the long term goals.

Winning Now, Winning Later: How Companies Can Succeed in the Short Term While Investing for the Long Term 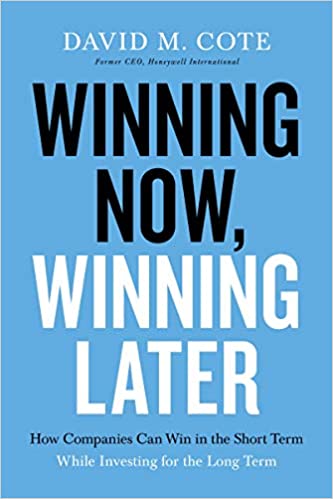 TLP211: Silence Says So Much
TLP213: How to Combat Leadership Bullies