Dr. Alexandra Rengel is the managing partner of the firm Mercado & Rengel, LLP and an Associate Professor at IE Business School. Dr. Rengel has broad experience as a litigator in the United States at the trial and appellate levels in both State and Federal Courts. A frequent guest lecturer on Privacy, Business Law, and Leadership, she is the author of Privacy in the 21st Century. Dr. Rengel shares her thoughts on leadership in Latinx communities, and the types of biases this diverse ethnic group has to overcome in the Western world.

[3:35] There are many preconceived notions of what define a “good leader.” When different ethnic groups were asked to draw an effective leader, they all drew a similar image. A character, often a white man, middle-aged, wearing a suit and looking powerful. It leaves a lot of people out.

[4:55] Some of the wealthiest people in the world are of Latinx descent but they’re relatively unknown to the western world.

[9:05] Truth is, we all have biases, but the key is being actively aware of them and working towards breaking them.

[10:00] Machismo in the Latino community is still a problem. Latin/Hispanic women are still being questioned if they’re too aggressive, or too masculine when they take on leadership roles. The criticism is coming from both genders.

[13:00] It’s critical that you be yourself and not be someone you “think you should” be.

[14:40] There is so much ambiguity within the Latinx community because it’s so diverse. Dr. Rengel explains a bit more about the differences between Latinx, Latino/Latina, and Hispanic communities.

[19:50] Don’t spin your wheels and fight with people over definitions. Prove your worth by achieving your goals. Lead your life on your terms and create positive change.

[20:15] Dr. Rengel shares a story of the types of biases she’s faced because of her accent.

[23:25] When we look to others for leadership guidance, we can often make it even harder for ourselves to just start because the standard has been set so high.

[25:55] Instead of trying to tackle the whole mountain and achieve a lofty goal, sometimes it’s the little steps, the ripple effects, that make the biggest of changes in the lives of others.

[27:05] Dr. Rengel shares a few leadership lessons that she’s learned from both her children and her peers.

[35:05] Listener challenge: Make an effort to give a diverse set of people a seat at the table. We need all perspectives.

Privacy in the 21st Century (Studies in Intercultural Human Rights) 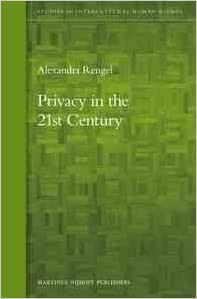